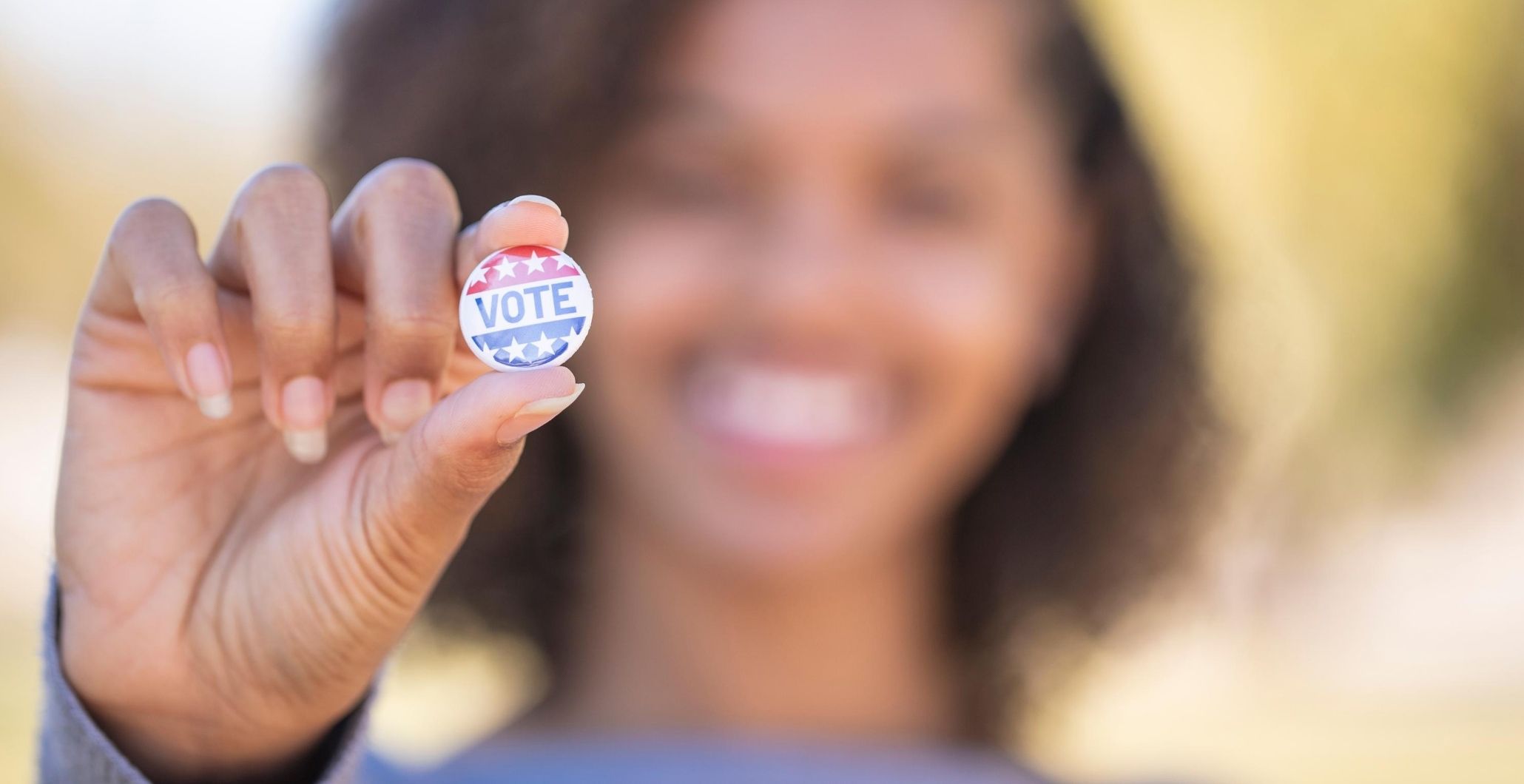 Women’s Equality Day is celebrated on August 26 to commemorate the 1920 adoption of the Nineteenth Amendment, which gave women the right to vote. In honor of this important holiday, we’ve gathered together some great books on the women who fought for the right to vote, as well as modern issues faced by women today.

In this list: the right to vote, modern activism, biography and history.

The Right To Vote

Mr. President, How Long Must We Wait?

Examines the complex relationship between suffragist leader Alice Paul and President Woodrow Wilson, revealing the life-risking measures that Paul and her supporters endured to gain voting rights for American women.

The Scarlet Sisters: Sex, Suffrage, And Scandal In The Gilded Age

Describes the adventures of two sisters who tried to overcome the male-dominated social norms of the late nineteenth century and achieved a remarkable list of firsts, including the first woman-run brokerage house and the first woman to run for president.

Explores the full scope of the movement to win the vote for women through portraits of its leaders and activists, including Lucretia Mott, Elizabeth Cady Stanton, Susan B. Anthony, Matilda Joslyn Gage, Sojourner Truth, Carrie Chapman Catt, Alice Paul, and Ida B. Wells-Barnett.

Why They Marched: Untold Stories Of The Women Who Fought For The Right To Vote

For too long the history of how American women won the right to vote has been told as the visionary adventures of a few iconic leaders, all white and native-born, who spearheaded a national movement. In this essential reconsideration, Susan Ware uncovers a much broader and more diverse history waiting to be told. Why They Marched is the inspiring story of the dedicated women–and occasionally men–who carried the banner in communities across the nation, out of the spotlight, protesting, petitioning, and demonstrating for the right to become full citizens.

The Woman’s Hour: The Great Fight To Win The Vote

The nail-biting climax of one of the greatest political battles in American history. Nashville, August 1920. The Nineteenth Amendment to the Constitution, granting all women the vote, is on the verge of ratification–or defeat. Out of the thirty-six states needed, thirty-five have approved it, and one last state is still in play–Tennessee. After a seven-decade crusade to win the ballot, this is the moment of truth for the suffragists, and Nashville becomes a frenzied battleground as the enormous forces allied for and against women’s suffrage make their last stand. Elaine Weiss artfully recasts the saga of women’s quest for the vote by focusing on the campaign’s last six weeks, when it all came down to one ambivalent state.

Comprised of historical texts spanning two centuries with commentary on each period by the editor, this book covers the major issues and figures involved in the women’s suffrage movement with a special focus on diversity, incorporating race, class, and gender.

Half The Sky: Turning Oppression Into Opportunity For Women Worldwide

Two Pulitzer Prize winners issue a call to arms against our era’s most pervasive human rights violation: the oppression of women in the developing world. They show that a little help can transform the lives of women and girls abroad and that the key to economic progress lies in unleashing women’s potential.

Make Trouble: Standing Up, Speaking Out, And Finding The Courage To Lead

From the president of Planned Parenthood Federation of America, a memoir about learning to lead and make change, based on a lifetime of fighting for women’s rights and social justice.

The Moment Of Lift: How Empowering Women Changes The World

A timely call to action for women’s empowerment by the influential co-chair of the Bill & Melinda Gates Foundation identifies the link between women’s equality and societal health, sharing uplifting insights by international advocates in the fight against gender bias.

Represent: The Woman’s Guide To Running For Office & Changing The World

A road map, tool kit, workbook, and organizer, Represent is chock-full of the essential knowledge that any potential woman candidate needs to know. Covers all the nuts and bolts of running for office, from filing and signature-gathering, to fundraising, managing social media, and harnessing the power of your supporters. With checklists, infographics, profiles of well-known women politicians, plus wisdom and advice from elected women across the United States.

We Should All Be Feminists

In this essay — adapted from her TEDx talk of the same name — Chimamanda Ngozi Adichie, award-winning author of Americanah, offers readers a unique definition of feminism for the twenty-first century, one rooted in inclusion and awareness. Drawing extensively on her own experiences and her understanding of the often masked realities of sexual politics, here is one remarkable author’s exploration of what it means to be a woman now — and an of-the-moment rallying cry for why we should all be feminists.

The Book Of Gutsy Women

Ensuring the rights and opportunities of women and girls remains a big piece of the unfinished business of the twenty-first century. While there’s a lot of work to do, we know that throughout history and around the globe women have overcome the toughest resistance imaginable to win victories that have made progress possible for all of us. That is the achievement of each of the women in this book.

The Boundaries Of Her Body: The Troubling History Of Women’s Rights In America

Until the late 19th century, women’s rights derived from husbands, fathers and sons. It was believed that their biology made women incapable of thinking rationally—hence they could not own property, vote or work as many hours or for as much pay as men. Drawing on legal and historical sources as well as the Bible, the journals of Meriwether Lewis and Lolita, Rowland covers every imaginable aspect of women’s legal lives, up to the present day.

Era Of Ignition: Coming Of Age In A Time Of Rage And Revolution

A passionate manifesto with personal stories, anecdotes, and opinions from the front lines of modern American womanhood from actor, filmmaker, and activist Amber Tamblyn.

Excellent Daughters: The Secret Lives Of Young Women Who Are Transforming The Arab World

In Abu Dhabi, Zoepf reports on a generation of Arab women who’ve found freedom in work outside the home. In Saudi Arabia she chronicles driving protests and women entering the retail industry for the first time. In the aftermath of Tahrir Square, she examines the crucial role of women in Egypt’s popular uprising. Deeply informed, heartfelt, and urgent, Good Daughters brings us a new understanding of the changing Arab societies–from 9/11 to Tahrir Square to the rise of ISIS–and gives voice to the remarkable women at the forefront of this change.

Hood Feminism: Notes From The Women That A Movement Forgot

A collection of essays taking aim at the legitimacy of the modern feminist movement, arguing that it has chronically failed to address the needs of all but a few women.

I Am Malala: The Girl Who Stood Up For Education And Was Shot By The Taliban

When the Taliban took control of the Swat Valley, one girl spoke out. Malala Yousafzai refused to be silenced and fought for her right to an education. On Tuesday October 9, 2012, she almost paid the ultimate price.

Invisible Women: Data Bias In A World Designed For Men

Data is fundamental to the modern world. From economic development, to healthcare, to education and public policy, we rely on numbers to allocate resources and make crucial decisions. But because so much data fails to take into account gender, because it treats men as the default and women as atypical, bias and discrimination are baked into our systems. And women pay tremendous costs for this bias, in time, money, and often with their lives.

No Small Courage: A History Of Women In The United States

Enriched by the wealth of new research into women’s history, No Small Courage offers a lively chronicle of American experience, charting women’s lives and experiences with fascinating immediacy from the precolonial era to the present. Individual stories and primary sources-including letters, diaries, and news reports-animate this history of the domestic, professional, and political efforts of American women.

More women campaigned for local or national office in the 2018 election cycle than at any other time in US history, challenging accepted notions about who seeks power and who gets it. Journalist Caitlin Moscatello reported on this wave of female candidates for New York magazine’s The Cut, Glamour, and Elle. And in See Jane Win, she further documents this pivotal time in women’s history. Closely following four candidates throughout the entire process, from the decision to run through Election Day, See Jane Win takes readers inside their exciting, winning campaigns and the sometimes thrilling, sometimes brutal realities of running for office while female.

On television, Wal-Mart employees are smiling women delighted with their jobs. But reality is another story. In 2000, Betty Dukes, a 52-year-old black woman in Pittsburg, California, became the lead plaintiff in a class action representing 1.4 million women. In an explosive investigation of this historic lawsuit, journalist Liza Featherstone reveals how Wal-Mart, a self-styled “family-oriented,” Christian company deprives women (but not men) of the training they need to advance, relegates them to lower-paying jobs,and demotes employees who object to discrimination.

Women’s stories are often written as if they spent their entire time on Earth casting woeful but beautiful glances towards the horizon and sighing into the bitter wind at the thought of any conflict. Well, that’s not how it f**king happened. When you hear about a woman who was 100% pure and good, you’re probably missing the best chapters in her life’s story. Maybe she slept around. Maybe she stole. Maybe she crashed planes. Maybe she got shot, or maybe she shot a bad guy (who probably had it coming.) Maybe she caused a scandal. Maybe she caused a riot.