What do black magic folk horror, a space trucker, futuristic crime, giant prehistoric sharks, a memoir about a nurse and her Alzheimer’s patient, and a couple trying in vitro have in common? You’ll find them all in these hot new graphic novels, available on hoopla!

What do black magic folk horror, a space trucker, Hell’s half-dozen, futuristic sci-fi crime, giant prehistoric sharks, a memoir about a nurse and her Alzheimer’s patient, and a couple trying in vitro have in common? You’ll find them all in these hot, new graphic novels, available on hoopla.

So even when the library is closed, you can still access all of these great titles—with no waiting!

All of these graphic novels are available for immediate download on hoopla. We’re big fans of the hoopla app—it’s easy to use, and you don’t need to wait for holds. For even more ebooks and audiobooks, check out OverDrive. RBdigital content has been folded into OverDrive!

E – EVERYONE
Appropriate for readers of all ages. May contain cartoon violence and/or some comic mischief.

PA – PARENTAL ADVISORY
Appropriate for 15 and up. Similar to T+, but featuring more mature themes and/or more graphic imagery. Recommended for teen and adult readers. 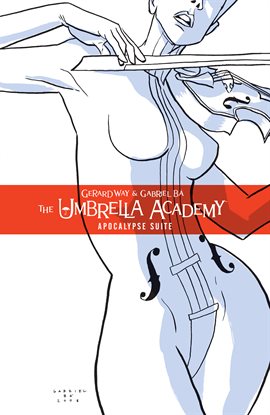 In an inexplicable worldwide event, forty-seven extraordinary children were spontaneously born to women who’d previously shown no signs of pregnancy. Millionaire inventor Reginald Hargreeves adopted seven of the children; when asked why, his only explanation was, “To save the world.” These seven children form the Umbrella Academy, a dysfunctional family of superheroes with bizarre powers. Nearly a decade later, the team disbands, but when Hargreeves unexpectedly dies, these disgruntled siblings reunite just in time to save the world once again. 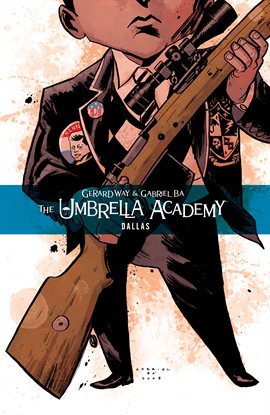 The team is despondent following the near apocalypse created by one of their own and the death of their beloved mentor Pogo. So it’s a great time for another catastrophic event to rouse the team into action. Trouble is—each member of the team is distracted by some very real problems of their own. The White Violin is bedridden due to an unfortunate blow to the head. Rumor has lost her voice—the source of her power. Spaceboy has eaten himself into a near-catatonic state, while Number Five dives into some shady dealings at the dog track and the Kraken starts looking at his littlest brother as the key to unraveling a mysterious series of massacres…all leading to a blood-drenched face-off with maniacal assassins, and a plot to kill JFK! 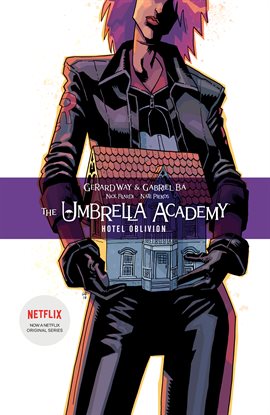 Faced with an increasing number of lunatics with superpowers eager to fight his own wunderkind brood, Sir Reginald Hargreeves developed the ultimate solution… Now, just a few years after Hargreeves’s death, his Umbrella Academy is scattered. Number Five is a hired gun, Kraken is stalking big game, Rumor is dealing with the wreckage of her marriage, an out-of-shape Spaceboy runs around the streets of Tokyo, Vanya continues her physical therapy after being shot in the head—and no one wants to even talk about what Séance is up to. 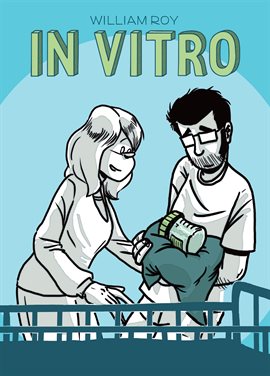 From unsuccessful attempts to repeated failures, the two newlyweds face a menacing foe: sterility. Together, they embark on the confusing journey that is in vitro fertilization. Haunted by the hyperbole of WebMD and the guilt of infertility, Guillaume experiences the daily embarrassment of sperm donations, tests with dreaded results and endless consultations—not to mention the specter of his own estranged father who reappears suddenly in his life… With realistic, self-effacing charm, William Roy humbly and accurately shares a deeply human experience that is propelled by unshakable hope. 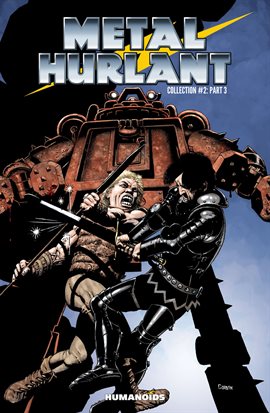 Métal Hurlant magazine was created in Paris in 1974 by Moebius, Druillet and Dionnet, the founding fathers of Les Humanoïdes Associés. This movement soon revolutionized the medium and inspired countless writers, artists and filmmakers the world over. Versions in various languages flourished everywhere, including in the States with “Heavy Metal.” The French version was eventually shut down in 1987. But in 2002, Humanoids relaunched a limited publication of a 13-issue anthology, with one main goal: establishing a creative bridge between the US and Europe. 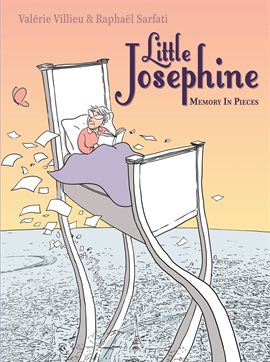 When Valérie first met Josephine, she knew she would be embarking on a unique journey. Though vastly different in age, their connection was instantaneous. Humor quickly became their language, their playground, and despite the debilitating disease that Joséphine faced every single day, they were able to form a beautiful friendship that transcended the reaches of modern medicine. 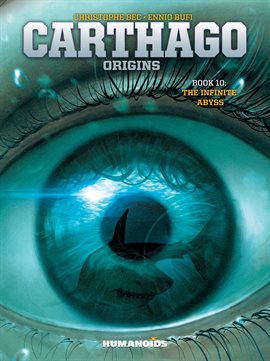 The megalodon, the prehistoric ancestor of the great white shark was the most ferocious predator of the seas, an 80 foot killing machine extinct for millions of years… But when divers drilling in an underwater cave are attacked by this living fossil, oceanographer Kim Melville discovers that this creature may not only have survived, but thrived, and is reclaiming its place at the top of the food chain. 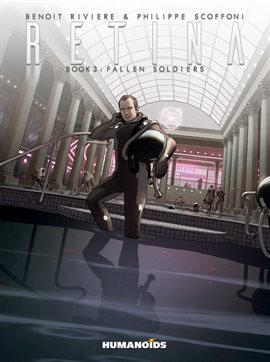 Los Angeles, 2030. Criminagent Milo Deckman witnesses the murder of a woman in the street. At the morgue, retinal identification indicates not one, but two identities, each with her own husband. Going against his better judgment, Deckman can’t resist getting involved in the case, but he soon finds that he’s not the only one interested in the double-life of this mysterious woman-she’s also wrapped up with a narc squad, an exclusive division of the federal intelligence agency, and the most infamous crime lord in L.A… and it’s not clear who’s on what side. 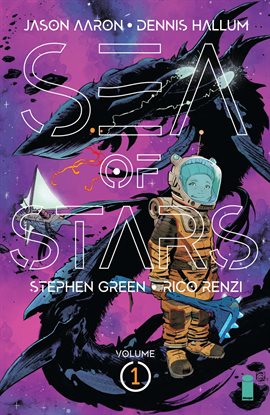 Sea Of Stars Vol. 1: Lost In The Wild Heavens

Being a space trucker may sound like a cool job, but in reality it can be boring as hell. So when recently widowed Gil gets a long-haul gig across the universe, he figures it’s safe enough to bring his young son Kadyn along for the ride. But when their “big rig” gets bitten in half by a gigantic Space Leviathan, Gil is separated from his young son-with a breached suit that’s venting oxygen at an alarming rate. He’ll have to defy the odds and stay alive long enough to rescue Kadyn. But Kadyn seems to be getting all the help he needs from a talking Space Monkey riding a Space Dolphin… or maybe it’s the strange powers he’s suddenly manifesting. 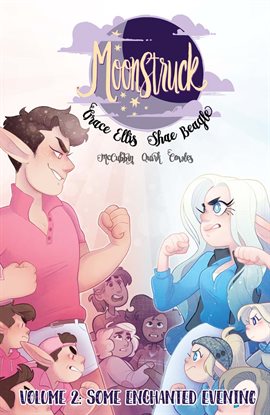 Werewolf barista Julie and her supernatural friends try to unwind at a party, but a conniving fraternity of fairy bros has other plans for our heroes. With one of their friends trapped in the frat house and the winter solstice (a notable night of magical mischief) looming ever closer, it’s up to the amorous werewolves and gregarious centaur to save the day. 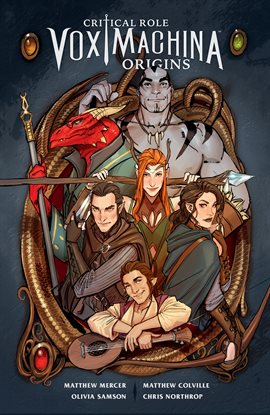 From the creators of the hit show “Critical Role” comes Vox Machina’s origin story! Writers Matthew Mercer and Matthew Colville team with artist extraordinaire Olivia Samson and colorist Chris Northrop to bring you the story of where the heroes’ journey began. The band of adventurers known as Vox Machina will save the world. Eventually. But even they have to start somewhere. Six would-be heroes on seemingly different jobs find their paths intertwined as they investigate shady business in the swamp town of Stilben. They’ll need to put their heads– and weapons–together to figure out what’s going on…and keep from being killed in the process. Even then, whether or not they can overcome what truly lurks at the bottom of the town’s travails remains to be seen! 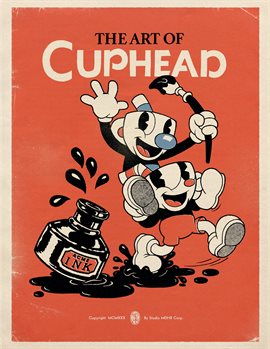 The Art Of Cuphead

Get transported back to the golden age of 1930s animation with an art book celebrating the acclaimed run & gun game, Cuphead! Each page of this curated collection of artwork is designed to capture the vintage look and feel of the 1930’s. Take a gander at the game’s traditional hand-drawn frame-by-frame animation. Peek at the early concepts, production work, and early ideas that went into the making of Cuphead’s characters, bosses, stages and more including never-before-seen content from the upcoming DLC! Relive the most cherished and challenging moments of Cuphead and Mugman’s adventure to reclaim their souls from The Devil, all in a way you’ve never seen before! Guided by personal insights from game directors Chad and Jared Moldenhauer, take a one-of-a-kind trip through the Inkwell Isles and discover an all-new appreciation for Cuphead’s animation style and challenging retro gameplay. 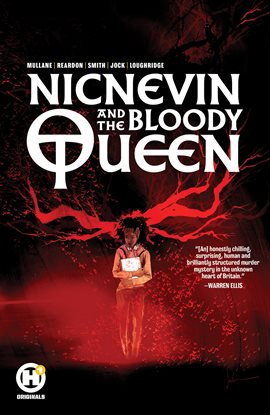 Nicnevin and the Bloody Queen

Something strange has been unleashed in the north of England. A modern-day druid commits a series of ghastly murders in an attempt to unleash the awesome power of the ancient gods of Great Britain. But all hell really breaks loose when his latest would-be victim, Nicnevin “NISSY” Oswald, turns out to be more than she seems. 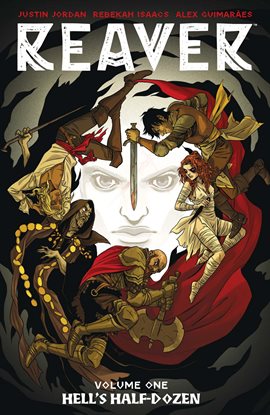 Deep within the untamed continent of Madaras, a darkness builds that must be stopped at all costs. To prevent the end of this new world, the Imperials assemble six of their most despicable prisoners-a turncoat, a skin eater, a sorcerer, his bodyguard, a serial killer, and the Devil’s Son. They are Hell’s Half-Dozen.