Thank you to all who entered, and congrats to the winner of our first ever Two-Sentence Horror Story Contest! 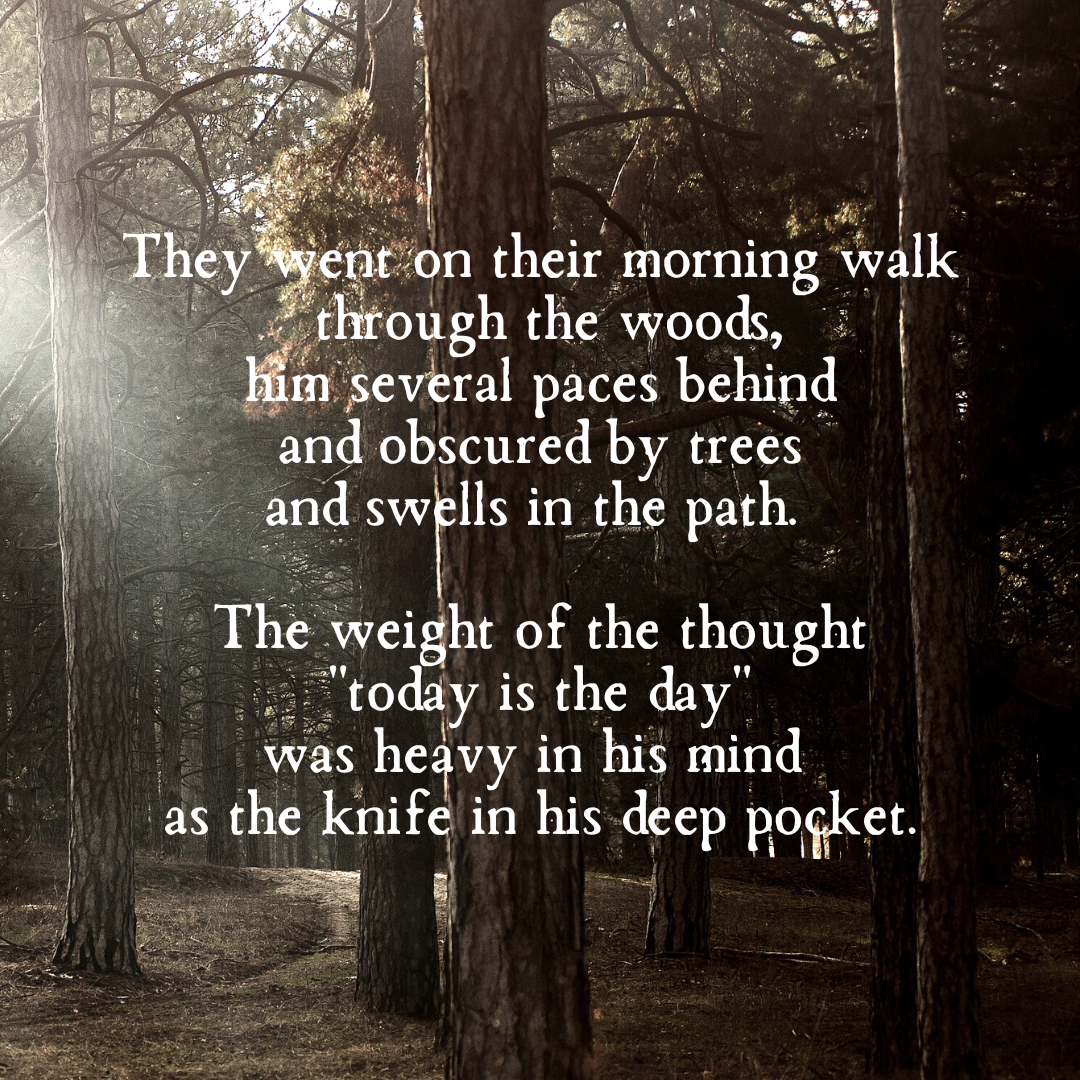 They went on their morning walk through the woods, him several paces behind and obscured by trees and swells in the path.

The weight of the thought, “today is the day” was heavy in his mind as the knife in his deep pocket.

My mom always said “you are what you eat.” I didn’t know she meant it literally.

As I lay nestled peacefully in my warm, comfy bed, I was abruptly awoken to a feeling of pure and utter dread. A blanket of ice cold daggers covered my body and it was then that I realized… It was Monday!

They went on their morning walk through the woods, him several paces behind and obscured by trees and swells in the path. The weight of the thought, “today is the day” was heavy in his mind as the knife in his deep pocket.

I watched the thick trail of crimson drain from her body as she hung from the hook in the barn like an animal. The sticky sweet smell filling my nostrils, and the sound of a sharp blade cutting through flesh filled my ears.

My father always told me that when the world ended it wouldn’t be because of a nuclear bomb or massive asteroid, it would be the snap of a folding universe with no warning. I lived my whole life in fear that someday I would just blink out of existen

The dead communicate to me such that I can feel them compromising their past behavior before their death as righteous doing this to drag me down into hell with them. They have been trying for a very long time and like the evil they were when they were alive they are failing now too.

Downton my darling little female cat is an indoor cat, since I have had her anyway, but still has the instinct to hunt as cats do. One night when I was getting ready to take my bath and pulled back the shower curtain there was a dead mouse by the drain, needless to say, I have never closed that shower curtain again it has been, maybe three years.

And so it was that the boa-constrictor pushed its way out of the hole in the cardboard box and silently slithered its way toward the open nursery door where my newborn daughter was sleeping. As I stepped out into the hallway, I heard an agonizing scream from my teenage son, thrashing about with his ax as he severed the head of the boa-constrictor.

Why do we love horror so much? Maybe it’s the adrenaline rush, or the way it lets us feel that spike of fear when really we’re perfectly safe—perhaps curled up on the couch with a Stephen King novel. It’s the thrill of danger, without any actual danger! And anyone who has watched A Quiet Place can tell you: bigger (and louder) doesn’t always mean scarier.

The small things can be just as terrifying…

With that in mind, we’re celebrating October (the spookiest month of the year) with a horror story contest! To participate, compose your own original horror story—in only two sentences!—and submit it below. You can enter as many stories as you like, as long as they are original and two sentences long.

The winner will be announced on Halloween.

Contest submissions are now closed. Thank you to everyone who participated!

The winner we be announced on Halloween—Monday, October 31, 2022. Everyone who participated will receive a custom bookmark featuring their two-sentence horror story!

Compose an original horror story in only two lines.

I begin tucking him into bed and he tells me, “Daddy check for monsters under my bed.” I look underneath for his amusement and see him, another him, under the bed, staring back at me quivering and whispering, “Daddy there’s somebody on my bed.”

I wake up and everything feels wrong; it’s too quiet outside. I look out the window and see everyone standing still, looking at my house.

Put back the mirrors. We miss watching you.

For more inspiration, check out:

The winner will be announced on Halloween—Monday, October 31, 2022.