Read a book with three or more main characters.

Many books are structured around one main character—the protagonist—and perhaps a second character in the form of a romantic interest.

But not these books! For this challenge, read a book with an ensemble cast—three or more main characters with roughly equal parts of the story. 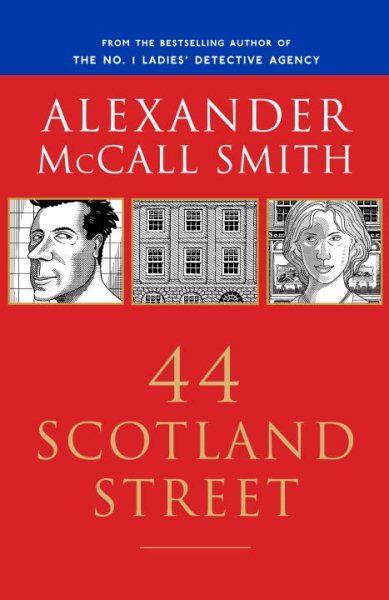 Pat rents a room from the handsome and cocky Bruce, at 44 Scotland Street, and discovers that she has also acquired some colorful new neighbors, including Domenica, an eccentric widow. Viewing an apartment normally doesn’t turn into a life-or-death situation, but this particular open house becomes just that: a failed bank robber bursts in and takes everyone in the apartment hostage.

As police surround the premises and television channels broadcast the hostage situation live, the eight strangers begin opening up to one another. Before long, the robber must decide which is the more terrifying prospect: going out to face the police, or staying in the apartment with this group of impossible people. “Everybody lies about their lives. What would happen if you shared the truth?”

This is the question that Julian Jessop, an eccentric, seventy-nine-year-old artist, poses within a pale green exercise book that he labels The Authenticity Project, before leaving it behind in Monica’s Café. When Monica discovers Julian’s abandoned notebook, not only does she add her own story to the book, she is determined to find a way to help Julian feel less lonely. Winning a junior ice hockey championship might not mean a lot to the average person, but it means everything to the residents of Beartown, a community slowly being eaten alive by unemployment and the surrounding wilderness.

At first, it seems like the team might have a shot at fulfilling the dreams of their entire town. But one night at a drunken celebration following a key win, something happens between Kevin and the general manager’s daughter—and the next day everything seems to have changed. A slapstick thriller set in Florida, featuring oddball characters. They include a homeless man who lives in a tree, a student with a squirt gun playing a game called Killer, a couple of real killers, and a terrorist with a nuclear bomb in a suitcase. After the climate wars, a floating city is constructed in the Arctic Circle, a remarkable feat of mechanical and social engineering, complete with geothermal heating and sustainable energy. Now crime and corruption have set in, the contradictions of incredible wealth alongside poverty are spawning unrest, and a new disease called “the breaks” is ravaging the population.

When a strange new visitor arrives—a woman riding an orca, with a polar bear at her side—the city is entranced. She very subtly brings together four people—each living on the periphery—to stage unprecedented acts of resistance. By banding together to save their city before it crumbles under the weight of its own decay, they will learn shocking truths about themselves. When we meet septuagenarian Margaret Hughes, she is living alone in a mansion in Seattle with only a massive collection of valuable antiques for company. Enter Wanda Schultz, a young woman with a broken heart who has come west to search for her wayward boyfriend.

Both women are guarding dark secrets and have spent many years building up protective armor against the outside world. But as the two begin their tentative dance of friendship, the armor begins to fall away and Margaret opens her house to the younger woman. This launches a series of remarkable and unanticipated events, leading Margaret to discover a way to redeem her cursed past, and Wanda to learn the true purpose of her cross-country journey. Letters and journals reveal the struggles, affairs, deceptions, and triumphs of five members of a village choir during World War II as they band together to survive the upheavals of war and village intrigue on the English home front. The Feast of Love

In vignettes both comic and sexy, the owner of a coffee shop recalls the day his first wife seemed to achieve a moment of simple perfection, while she remembers the women’s softball game during which she was stricken by the beauty of the shortstop. A young couple spends hours at the coffee shop fueling the idea of their fierce love. A professor of philosophy, stopping by for a cup of coffee, makes a valiant attempt to explain what he knows to be the inexplicable workings of the human heart. Fellowship of the Rings

In a sleepy village in the Shire, young Frodo Baggins finds himself faced with an immense task, as his elderly cousin Bilbo entrusts the Ring to his care. Frodo must leave his home and make a perilous journey across Middle-earth to the Cracks of Doom, there to destroy the Ring and foil the Dark Lord in his evil purpose.

The Lord of the Rings tells of the great quest undertaken by Frodo and the Fellowship of the Ring: Gandalf the Wizard; the hobbits Merry, Pippin, and Sam; Gimli the Dwarf; Legolas the Elf; Boromir of Gondor; and a tall, mysterious stranger called Strider. As London is emerging from the shadow of World War II, writer Juliet Ashton discovers her next subject in a book club on Guernsey—a club born as a spur-of-the-moment alibi after its members are discovered breaking curfew by the Germans occupying their island. One hundred and fifty years ago, Chawton was the final home of Jane Austen, one of England’s finest novelists. Now it’s home to a few distant relatives and their diminishing estate. With the last bit of Austen’s legacy threatened, a group of disparate individuals come together to preserve both Jane Austen’s home and her legacy.

These people—a laborer, a young widow, the local doctor, and a movie star, among others—could not be more different and yet they are united in their love for the works and words of Austen. As each of them endures their own quiet struggle with loss and trauma, some from the recent war, others from more distant tragedies, they rally together to create the Jane Austen Society. Once upon a time, in a faraway kingdom, a hero, the Chosen One, was born… and so begins every fairy tale ever told. This is not that fairy tale. There is a Chosen One, but he is unlike any One who has ever been Chosened. And there is a faraway kingdom, but you have never been to a magical world quite like the land of Pell. There, a plucky farm boy will find more than he’s bargained for on his quest to awaken the sleeping princess in her cursed tower.

First there’s the Dark Lord who wishes for the boy’s untimely death…and also very fine cheese. Then there’s a bard without a song in her heart but with a very adorable and fuzzy tail, an assassin who fears not the night but is terrified of chickens, and a mighty fighter more frightened of her sword than of her chain-mail bikini. This journey will lead to sinister umlauts, a trash-talking goat, the Dread Necromancer Steve, and a strange and wondrous journey to the most peculiar “happily ever after” that ever once-upon-a-timed In a tale set in Manhattan of 1974, a radical young Irish monk struggles with personal demons while making his home among Bronx prostitutes, a group of mothers is separated by personal differences in spite of shared grief over their lost Vietnam soldier sons, and a young grandmother attempts to prove her worth by soliciting men at the side of her teenage daughter. When Captain Jim Holden’s ice miner stumbles across a derelict, abandoned ship, he uncovers a secret that threatens to throw the entire system into war. Attacked by a stealth ship belonging to the Mars fleet, Holden must find a way to uncover the motives behind the attack, stop a war and find the truth behind a vast conspiracy that threatens the entire human race. It’s 2003 and Romy Hall is at the start of two consecutive life sentences at Stanville Women’s Correctional Facility, deep in California’s Central Valley. Outside is the world from which she has been severed: the San Francisco of her youth and her young son, Jackson. Inside is a new reality: thousands of women hustling for the bare essentials needed to survive; the bluffing and pageantry and casual acts of violence by guards and prisoners alike; and the deadpan absurdities of institutional living, which Kushner evokes with great humor and precision. As Florin and Guilder teeter on the verge of war, the reluctant Princess Buttercup is devastated by the loss of her true love, kidnapped by a mercenary and his henchman, rescued by a pirate, forced to marry Prince Humperdinck, and rescued once again by the very crew who absconded with her in the first place.

In the course of this dazzling adventure, she’ll meet Vizzini, the criminal philosopher who’ll do anything for a bag of gold; Fezzik, the gentle giant, Inigo, the Spaniard whose steel thirsts for revenge, and Count Rugen, the evil mastermind behind it all. Foiling all their plans and jumping into their stories is Westley, Princess Buttercup’s one true love and a very good friend of a very dangerous pirate. A Visit From the Goon Squad

Bennie Salazar, an aging former punk rocker and record executive, and Sasha, the passionate, troubled young woman he employs confront their pasts in this powerful story about how rebellion ages, influence corrupts, habits turn to addictions, lifelong friendships fluctuate and turn, and how art and music have the power to redeem.