The best sci-fi audio on hoopla!

Our resident fan of sci-fi and horror, Mike, has sifted through over six thousand audiobooks on hoopla to bring you the best in Science Fiction.

Our resident fan of sci-fi and horror, Mike, has sifted through over six thousand audiobooks on hoopla to bring you the best in Science Fiction.

Exclusive footage of Mike volunteering for this assignment

All of these audiobooks are available for immediate download on hoopla. We’re big fans of the hoopla app—it’s easy to use, and you don’t need to wait for holds! For even more ebooks and audiobooks, check out our other two services, OverDrive and RBdigital! 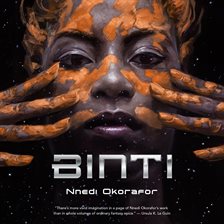 Nnedi Okorafor
Her name is Binti, and she is the first of the Himba people ever to be offered a place at Oomza University, the finest institution of higher learning in the galaxy. But to accept the offer will mean giving up her place in her family to travel between the stars among strangers who do not share her ways or respect her customs.Knowledge comes at a cost, one that Binti is willing to pay, but her journey will not be easy. 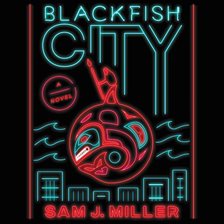 Sam J. Miller
An incisive and beautifully written story of love, revenge, and the power (and failure) of family in a scarily plausible future. Blackfish City simmers with menace and heartache, suspense and wonder. Plus, it has lots of action and a great cast of characters. Not to mention an orca and a polar bear! 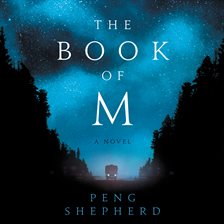 The Book of M

Peng Shepherd
One afternoon at an outdoor market in India, a man’s shadow disappears-an occurrence science cannot explain. He is only the first. The phenomenon spreads like a plague, and while those afflicted gain a strange new power, it comes at a horrible price: the loss of all their memories. 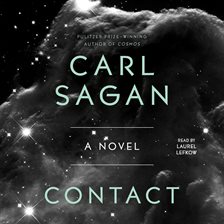 Carl Sagan
The future is here…in an adventure of cosmic dimension. In December, 1999, a multinational team journeys out to the stars, to the most awesome encounter in human history. Who — or what — is out there? In Cosmos, Carl Sagan explained the universe. In Contact, he predicts its future — and our own. 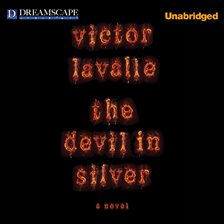 The Devil in Silver

Victor Lavalle
Pepper is a rambunctious big man, and, suddenly, the surprised inmate of a budget-strapped mental institution in Queens, New York. He’s not mentally ill, but that doesn’t seem to matter. On his first night, he’s visited by a terrifying creature who nearly kills him before being hustled away by the hospital staff. It’s no delusion: The other patients confirm that a hungry devil roams the hallways when the sun goes down. 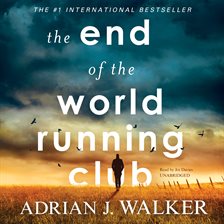 The End of the World Running Club

Adrian J. Walker
Edgar Hill is thirty-five and caught in his own headlock. Overweight slob, under-performing husband, and reluctant father-for Ed, the world may as well have already ended. So when it does end in a catastrophic asteroid strike and Edgar and his family find refuge in an Edinburgh army barracks, it comes as something of a relief. But nothing’s ever that simple. 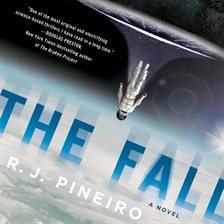 R.J. Pineiro
Jack Taylor has always been an adrenaline junkie, and this next job is right up his alley. Jack has been assigned to test an orbital jump and if it works, the United States government will have a new strategy against enemy countries. On the day of Jack’s big jump, he doesn’t burn up like some predicted—instead, he hits the speed of sound and disappears. Jack wakes up in an alternate universe. One where he died during a mission five years earlier and where his wife Angela is still madly in love with him. 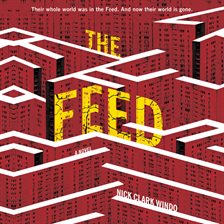 Nick Clark Windo
IT MAKES US. IT DESTROYS US. NOW WE MUST LEARN TO LIVE WITHOUT IT. The Feed is accessible everywhere, by everyone, at any time. It instantaneously links us to all information and global events as they break. Every interaction, every emotion, every image can be shared through it; it is the essential tool everyone relies on to know and understand the thoughts and feelings of partners, parents, friends, children, colleagues, bosses, employees . . . in fact, of anyone and everyone else in the world. 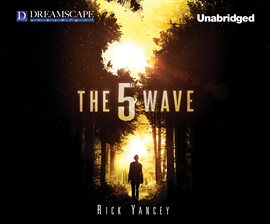 Rick Yancey
After the 1st wave, only darkness remains. After the 2nd, only the lucky escape. And after the 3rd, only the unlucky survive. After the 4th wave, only one rule applies: trust no one. Now, it’s the dawn of the 5th wave, and on a lonely stretch of highway, Cassie runs from Them. The beings who only look human, who roam the countryside killing anyone they see. 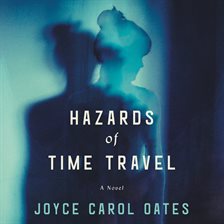 Joyce Carol Oates
A recklessly idealistic girl dares to test the perimeters of her tightly controlled (future) world and is punished by being sent back in time to a region of North America – “Wainscotia, Wisconsin”-that existed eighty years before. Cast adrift in time in this idyllic Midwestern town she is set upon a course of “rehabilitation”-but cannot resist falling in love with a fellow exile and questioning the constrains of the Wainscotia world with results that are both devastating and liberating. 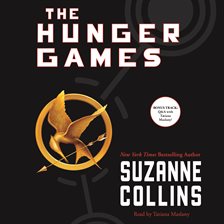 Suzanne Collins
In the ruins of a place once known as North America lies the nation of Panem, a shining Capitol surrounded by twelve outlying districts. The Capitol keeps the districts in line by forcing them all to send one boy and one girl between the ages of twelve and eighteen to participate in the annual Hunger Games, a fight to the death on live TV. 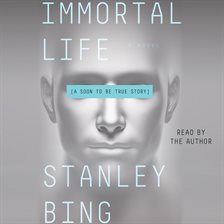 Stanley Bing
An ancient mogul has bought the power to live forever, but the strong young body he plans to inhabit has other ideas. Immortal life. A fantasy, an impossible dream-or is it? The moguls of Big Tech are pouring their mountain of wealth into finding a cure for death and they are determined to succeed. 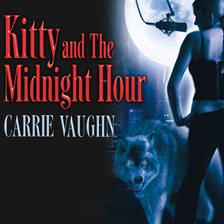 Kitty and the Midnight Hour

Carrie Vaughn
Kitty Norville is a midnight-shift DJ for a Denver radio station-and a werewolf in the closet. Sick of lame song requests, she accidentally starts “The Midnight Hour,” a late-night advice show for the supernaturally disadvantaged.After desperate vampires, werewolves, and witches across the country begin calling in to share their woes, her new show is a raging success. But it’s Kitty who can use some help. With one sexy werewolf hunter and a few homicidal undead on her tail, Kitty may have bitten off more than she can chew. 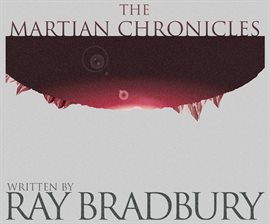 Ray Bradbury
Ray Bradbury’s, The Martian Chronicles is a classic work of 20th-century literature whose extraordinary power and imagination remain undimmed by time’s passage. In connected, chronological stories, a true grandmaster once again enthralls, delights, and challenges us with his vision and his heart, starkly and stunningly exposing in brilliant spacelight our strength, our weakness, our folly, and our poignant humanity on a strange and breathtaking world where humanity does not belong. 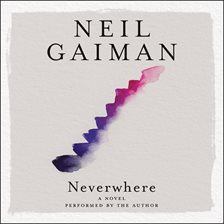 Neil Gaiman
Richard Mayhew is a young man with a good heart and an ordinary life, which is changed forever when he stops to help a girl he finds bleeding on a London sidewalk. His small act of kindness propels him into a world he never dreamed existed. There are people who fall through the cracks, and Richard has become one of them. And he must learn to survive in this city of shadows and darkness, monsters and saints, murderers and angels, if he is ever to return to the London that he knew. 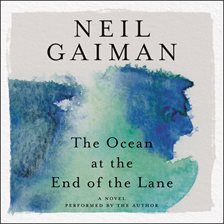 The Ocean at the End of the Lane

Neil Gaiman
Sussex, England. A middle-aged man returns to his childhood home to attend a funeral. He is drawn to the farm at the end of the road, where, when he was seven, he encountered a most remarkable girl, Lettie Hempstock. He hasn’t thought of Lettie in decades, and yet sitting by the pond (a pond that she’d claimed was an ocean), the unremembered past comes flooding back. 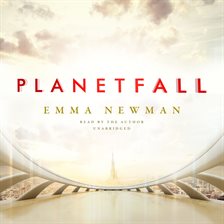 Emma Newman
Renata Ghali believed in Lee Suh-Mi’s vision of a world far beyond Earth, a planet promising to reveal the truth about our place in the cosmos, untainted by overpopulation, pollution, and war. Ren believed in that vision enough to give up everything to follow Suh-Mi into the unknown. 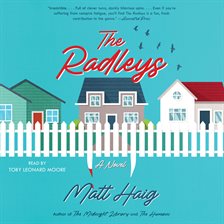 Matt Haig
Just about everyone knows a family like the Radleys. Many of us grew up next door to one. They are a modern family, averagely content, averagely dysfunctional, living in a staid and quiet suburban English town. Peter is an overworked doctor whose wife, Helen, has become increasingly remote and uncommunicative. Rowan, their teenage son, is being bullied at school, and their anemic daughter, Clara, has recently become a vegan. They are typical, that is, save for one devastating exception: Peter and Helen are vampires and have-for seventeen years-been abstaining by choice from a life of chasing blood in the hope that their children could live normal lives. 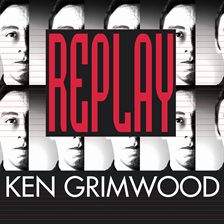 Ken Grimwood
What if you could live your life over again, knowing the mistakes you’d made before? Forty-three-year-old Jeff Winston gets several chances to do just that. Trapped in a tepid marriage and a dead-end job, he dies in 1988 and wakes up to find himself in 1963, at the age of eighteen, staring at his dorm room walls at Emory University. It’s all the same…but different: Jeff knows what the future holds. He knows who will win every World Series…every Kentucky Derby…even how to win on Wall Street. The one thing he doesn’t know is: Why has he been chosen to replay his life? 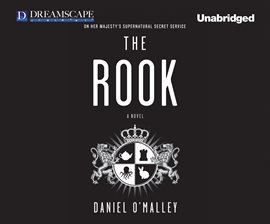 Daniel O’Malley
The body you are wearing used to be mine.’ So begins the letter Myfanwy Thomas is holding when she awakes in a London park surrounded by bodies wearing latex gloves. With no recollection of who she is, Myfanwy must follow the instructions her former self left behind to track down the agents who want to destroy her. She soon learns that she is a Rook, a high-ranking member of a secret organization called the Chequy that battles the many supernatural forces at work in Britain. 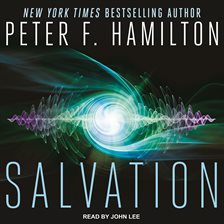 Peter F. Hamilton
In 2204, humanity is expanding into the wider galaxy in leaps and bounds. Cutting-edge technology of linked jump gates has rendered most forms of transportation-including starships-virtually obsolete. Every place on Earth, every distant planet humankind has settled, is now merely a step away from any other. And all seems wonderful-until a crashed alien spaceship of unknown origin is found on a newly located world eighty-nine light-years from Earth, carrying a cargo as strange as it is horrifying. 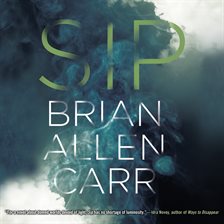 Brian Allen Carr
It started with a single child, and quickly spread: you could get high by drinking your own shadow. At night, lights were destroyed so that addicts could sip shadow in the pure light of the moon. Gangs of shadow addicts chased down children on playgrounds, rounded up old ladies from retirement homes. Cities were destroyed and governments fell. And if your shadow was sipped entirely, you became one of them, had to find more shadow, at any cost, or go mad. 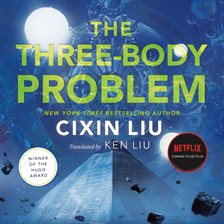 Cixin Liu
Set against the backdrop of China’s Cultural Revolution, a secret military project sends signals into space to establish contact with aliens. An alien civilization on the brink of destruction captures the signal and plans to invade Earth. Meanwhile, on Earth, different camps start forming, planning to either welcome the superior beings and help them take over a world seen as corrupt, or to fight against the invasion. The result is a science fiction masterpiece of enormous scope and vision. 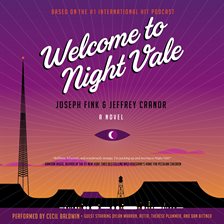 Joseph Fink
From the creators of the wildly popular Welcome to Night Vale podcast comes an imaginative mystery of appearances and disappearances that is also a poignant look at the ways in which we all struggle to find ourselves…no matter where we live. Located in a nameless desert somewhere in the great American Southwest, Night Vale is a small town where ghosts, angels, aliens, and government conspiracies are all commonplace parts of everyday life. It is here that the lives of two women, with two mysteries, will converge.